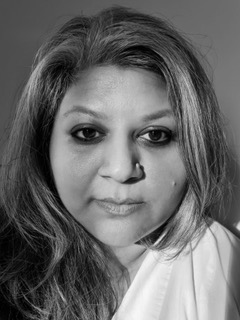 Alakananda Nag is a photographer, writer and filmmaker.

She lives in Goa – a choice she made five years ago to find a tranquil place to create work.

She graduated in Documentary Photography and Photojournalism from International Center of Photography in New York. Soon after graduating she realized that traditional documentary is not her calling and thereafter started a search for the core of her practice. It took almost a decade, one self-published book, shifting four cities and a series of failures to understand where her heart lies.

She photographs, is an avid researcher, uses archive generously, and writes.

Writing is something she stumbled upon but now seems to be evolving as the core of her practice along with photography.

She is the author of her work and edits and curates her work herself.

She has been a participating artist in the Fulbright funded prestigious international project Following the Box, based on a set of 128 found photographs from 1945 taken by an American soldier during WWII around Calcutta.

Her first photobook, the self-published Armenians of Calcutta launched in February 2021 at Printed Matter’s Virtual Art Book Fair. She is an Arts Practice grantee of the India Foundation for the Arts.